I used strip tubes to make this quilt using the book Strip Tubing by Cozy Quilt Designs.  I would not use this method again.  Even with lots of starch, I still had stretching.  Next time I would cut triangles from my sewn 2-1/2" strips.  I would have a bias on two sides with this method.  I would then cut squares from my background and cut them twice diagonally to get four triangles.  This way, I would have bias against bias and the outside edges would be on straight of grain.  Here it is: 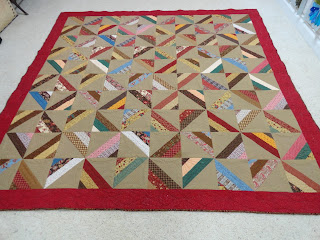 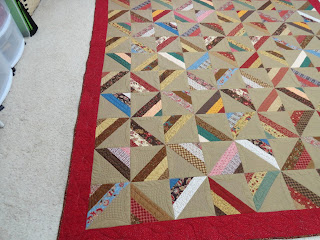 I used up lots of fabric from my scrap pile!!  You can see the waves in my binding, too.  I tried two new methods combined.  I used Edyta Sitar's method of sewing a single layer of binding to the quilt, then folding the remainder in half to the sewn line, thus alleviating some of the bulk.  Then I used Sharon Schambler's method of gluing it down before stitching to the back.  Lots of extra work.  I won't do the gluing anymore but I might give Edyta Sitar's method another try.
Let's just say, this is not my favorite quilt!!  But it is kinda masculine -- maybe a Quilts of Valor quilt.
Posted by Joyce at 11:39 AM