Thank goodness we didn't get ice as bad as a lot of areas.  Here are pictures
of our woods: 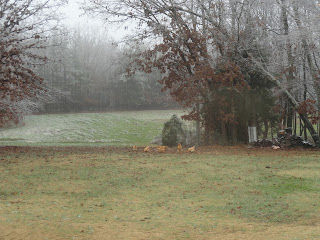 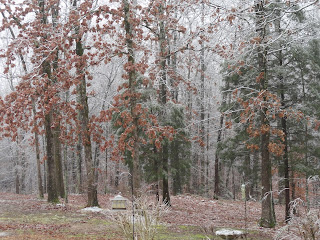 It was so pretty!  Not lot this morning's dreary rain, rain, rain!!!
Lit'l Bit never gets on Bruta's bed but for some reason she decided to and Bruta refused to lay down until we moved her!! 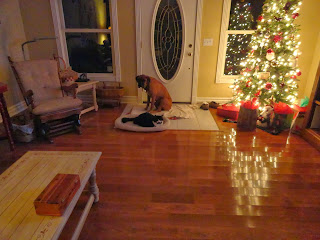 What a pathetic look on his face!!  He isn't doing well at all, but he is still hanging in there.  With him on lassix, it is like having a new baby.  David & I take turns at night taking him outside.
David's friend has an English bulldog he wants to give to us.  The bulldog is one year old.  I haven't seen him but David says he is so ugly that he is cute.  Don't know if I'm up to another dog with Bruta so ill.  We'll see what happens.